Things to think about before you vote. 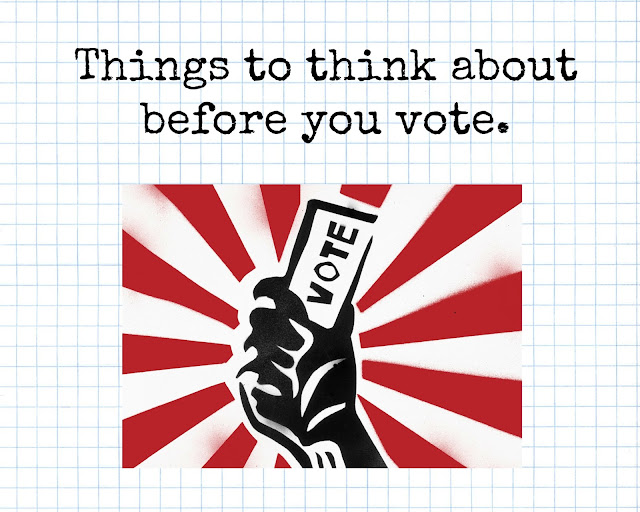 Urgh.  The general election is on Thursday (the 8th of June, please don't forget to vote!).  I'm currently not friends with politics (see Brexit, Trump and Theresa May), but it's our duty to know the facts and to vote.  I'll be voting Labour.  I'm a Green Party girl at heart, but I don't think they'll win (yet, one day maybe) and I can't bear to think what another 5 years with the Tories will bring us, so Jeremy it is.  He has an allotment and buys the Big Issue after all.

Firstly (most importantly) you can vote between 7am and 10pm on Thursday.  You should have received a polling card that tells you where your polling station is.  If you've lost your card you can still vote as long as you're on the electoral register and at the right polling station and can give your name and address (find your polling station here).  If you're unsure of anything contact your local council's electoral services, they are wise and can answer all your questions.

Find out which political party matches up with your views at I side with.

Read about why climate change matters this election, and what you can do about it.

Friend's of the Earth have published a survival guide for the election, their comparison on how the parties score on eco issues is particularly helpful.

Check out Labour's manifesto, and the Conservatives too (if you really want to, ack, ack).  The Lib Dem's is here and the lovely Green Party's here.

Use your vote tactically to prevent a tory victory and maybe make Brexit a little better.

(By the way, I think you should vote for the party, rather than the leader.  I like Corbyn, but even if you don't the Labour Party has lots of good and skilled politicians in it.  Let's face it, no one voted for Theresa May and she's in charge, so anything can happen in 5 years)

Here are 16 more reasons to vote for Corbyn.

And 5 more why young people should vote for Labour.

I don't normally watch The One Show, but I randomly caught Corbyn's appearance, where he discussed manhole covers, his allotment and he brought a jar on home-made jam to give to the hosts.

And can I just remind you that Theresa May supports fox hunting, fracking, is the anti-feminist, will privatise the NHS, under-fund our schools and she held hands with Donald Trump.

Fingers (and toes) crossed for Thursday and all the positive vibes and Jedi mind hugs for everyone feeling pre election jitters/ennui/anxiety/extreme nausea!