I have to hang my head in shame and admit I've neglected the garden (again!) this month.  I think I've been out there once all month, whoopsy! 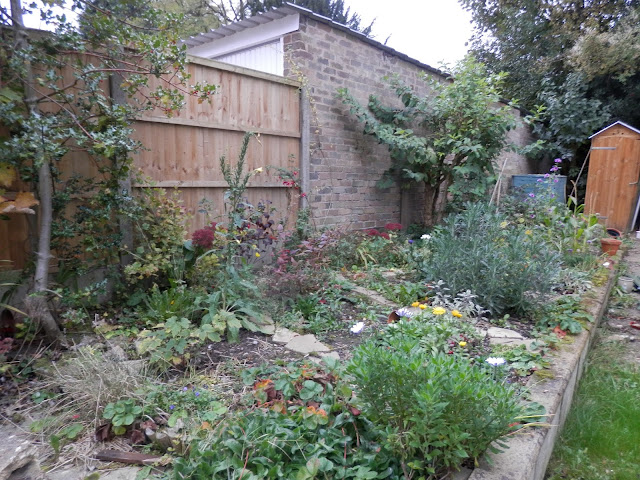 Having said that the garden isn't looking toooo bad, I've used a clever camera angle to cut out most of the mess though!

I even have some flowers still going! 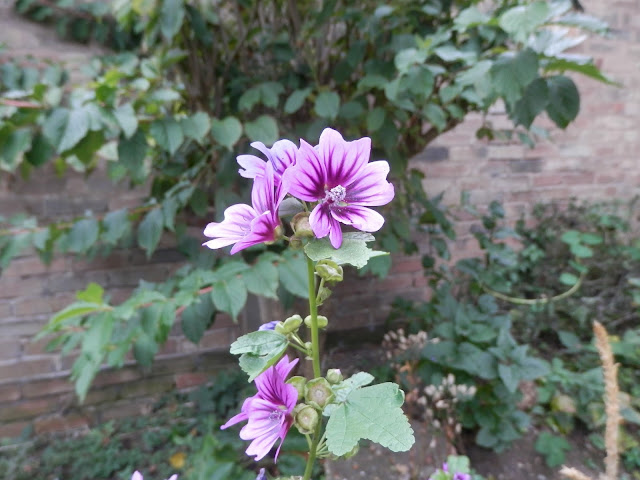 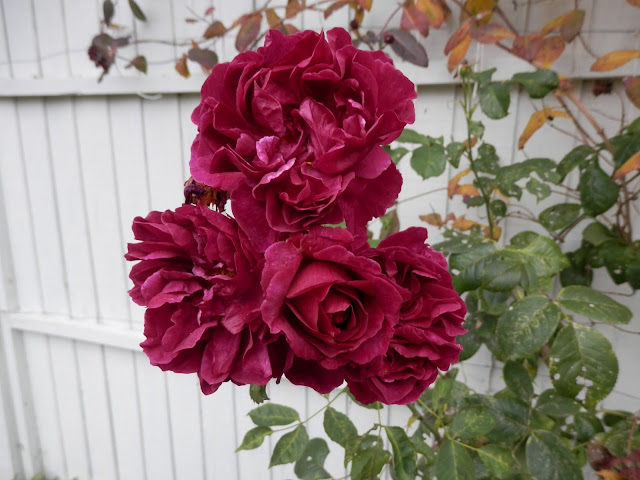 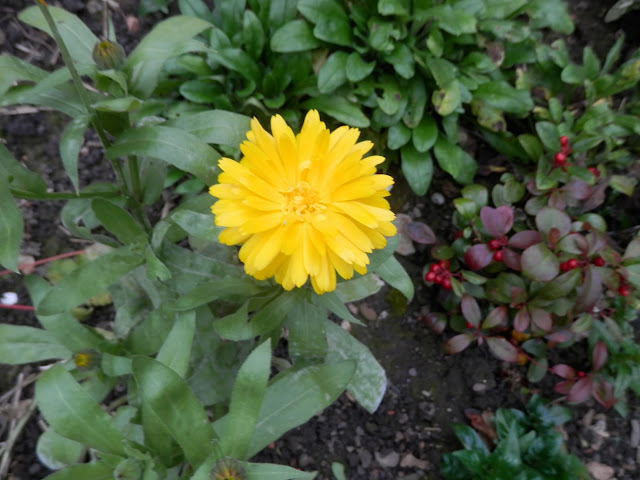 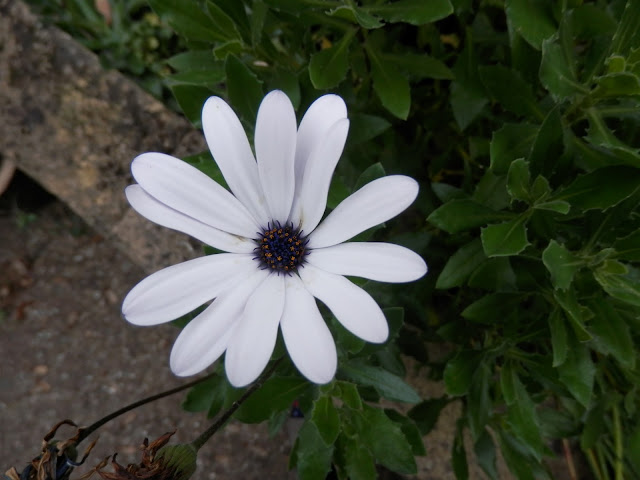 And my sweetcorn, minipops, is growing little cobs.  I planted it super late so I'm hoping to get a super late harvest before the frosts hit. 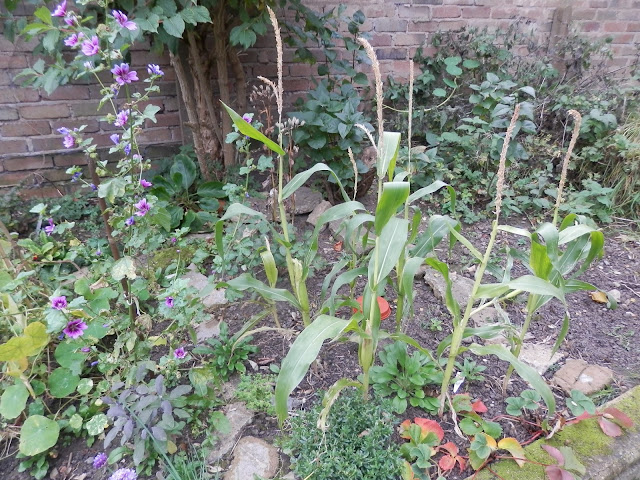 I'm not asking why the lettuce I planted in summer is only growing now, I'm just excited to be eating home grown lettuce in October!  This is my front garden raised bed, I cleared the fridge out and found lots of tiny garlic cloves we hadn't eaten so I planted them.  You can see them on the right of the raised bed, they've all grown so I'm hoping for bulbs in the spring! 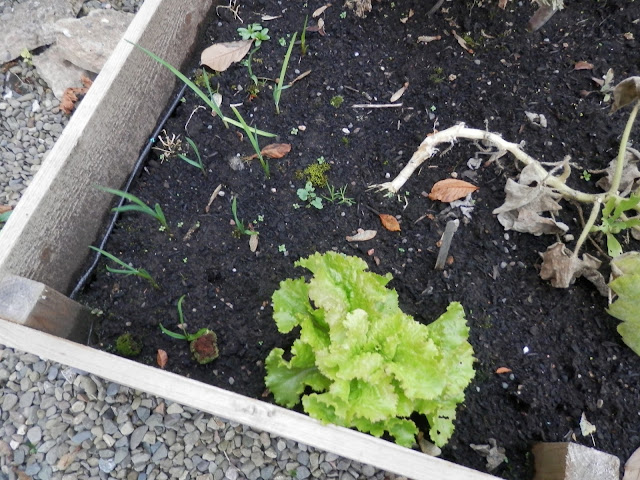 I've had a few ripe tomatoes from the tiny tim variety I planted from seed.  Only one san marzano tomato ripened, even though the plant had loads of tomatoes on it! 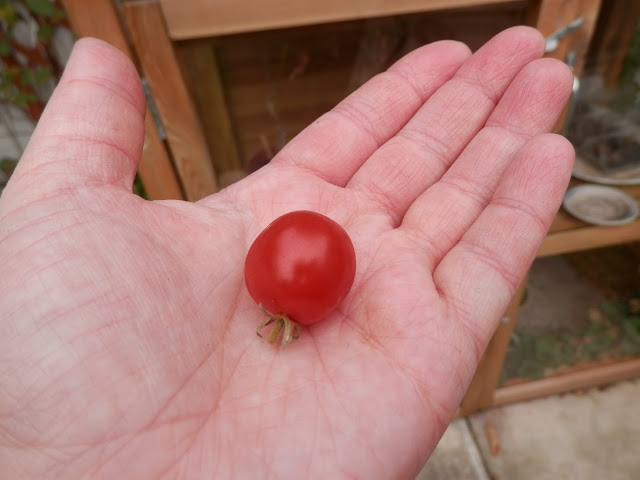 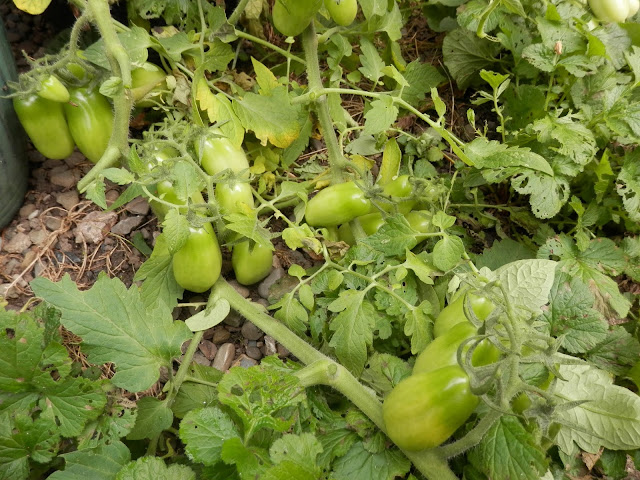 Look how beautifully red my blueberry bushes have gone. 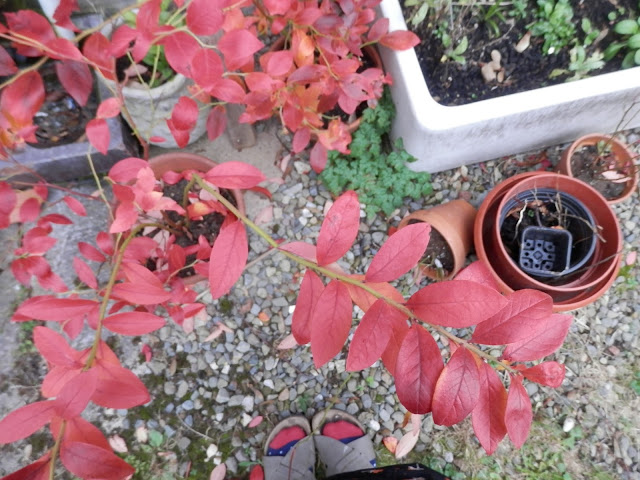 My best garden thing this month is my raspberries.  I think I said before that I was letting the branches flop over to hide the berries from birds.  This has worked really well and the berries have been huge and delicious! 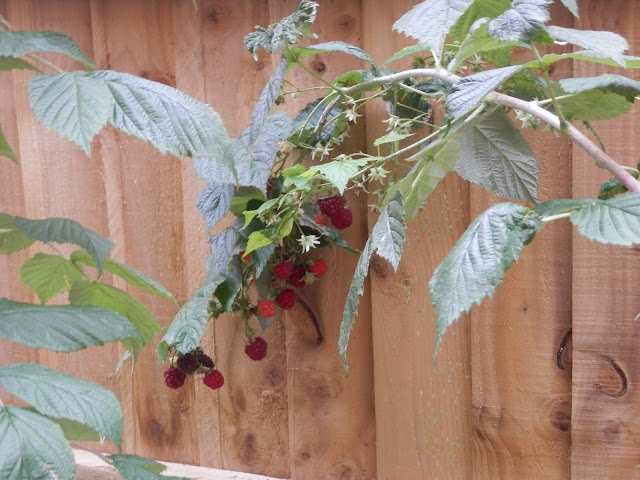 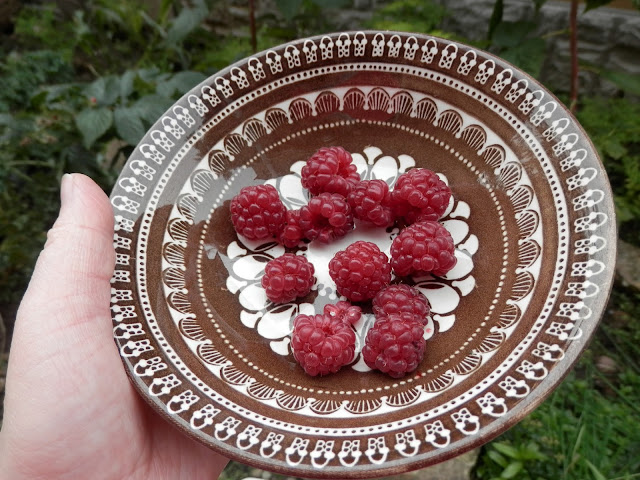 How's your garden this month?

Posted by Susie - secondhandsusie.blogspot.com at 7:30 am 3 comments:

Vegan Life Magazine is my favourite magazine, I'm always so happy when my next digital copy pings up on my laptop!   I thought I'd show you a little peek at October's issue.

The cover always has something really, really yummy looking on it! 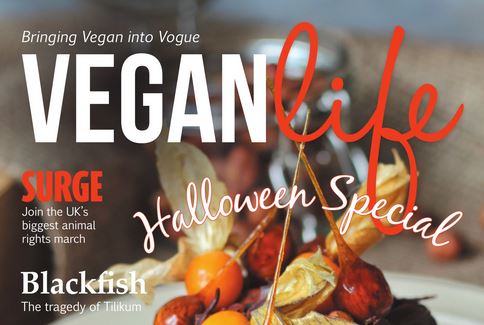 You can check out the vegan diary to see if there are any fun events going on near you. 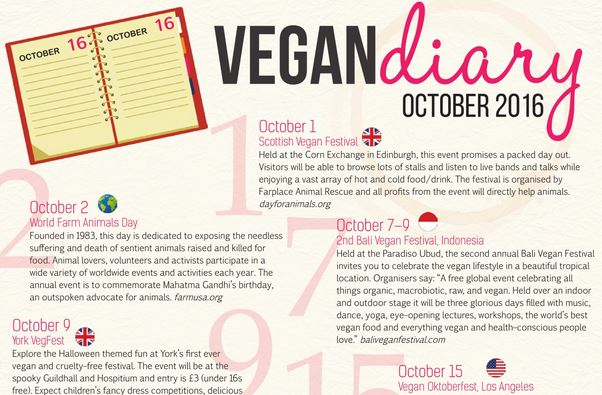 One of my fave sections is the vegan finds page, I love finding exciting new vegan friendly products! 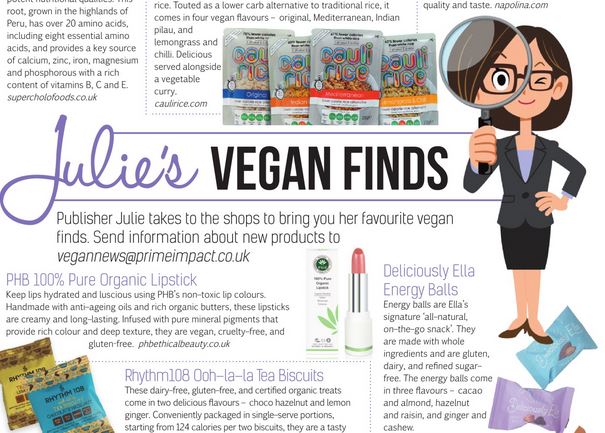 There's a monthly feature to give you ideas on how to use the contents of your veg box.  I don't get a veg box delivered, but there's still lots of inspiration for how to use up seasonal fruit and veg. 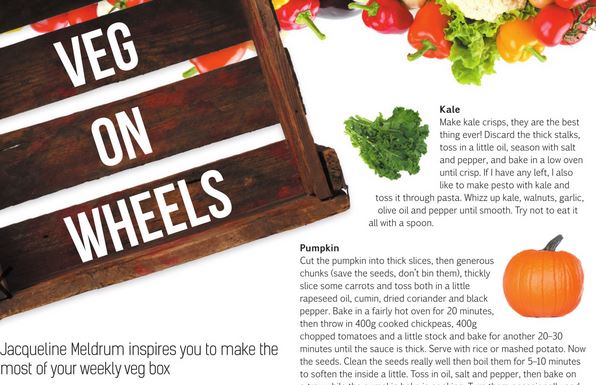 Each issue contains a few interesting and well balanced articles.  I liked this one about teaching animal rights. 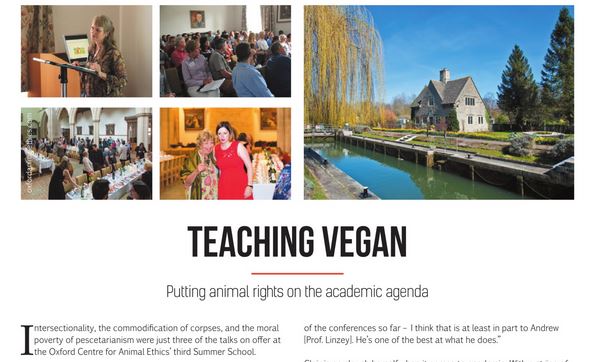 And I'll just leave you with this carrot cake pancake stack, the recipe is in October's issue of Vegan Life! 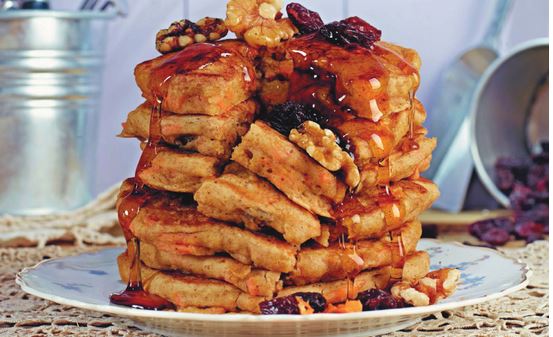 Don't forget to check out my other posts about Vegan Life Magazine too!

Disclosure - I get a digital subscription to Vegan Life Magazine in return for giving them a shout out every month.  I only work with brands I like and all opinions and ideas are my own.  Images in this blog post are courtesy of and belong to Vegan Life Magazine.  Vegan Life Mag is ace, you can subscribe here.
* Facebook * Instagram * Twitter * Bloglovin' *

Posted by Susie - secondhandsusie.blogspot.com at 7:30 am 4 comments:

How to make vegan potato and lentil bake, the perfect autumnal comfort food.

This vegan potato and lentil bake is my take on one of my Mum's vegan recipes.  We call it Monday Bake because Mum would cook it on Sunday night in the oven with the Sunday dinner then reheat it to eat on Monday after we'd all had a busy day at work and school.

I still call it Monday Bake, although it can be eaten any day of the week, and it's even good zapped in the microwave at work for lunch too. 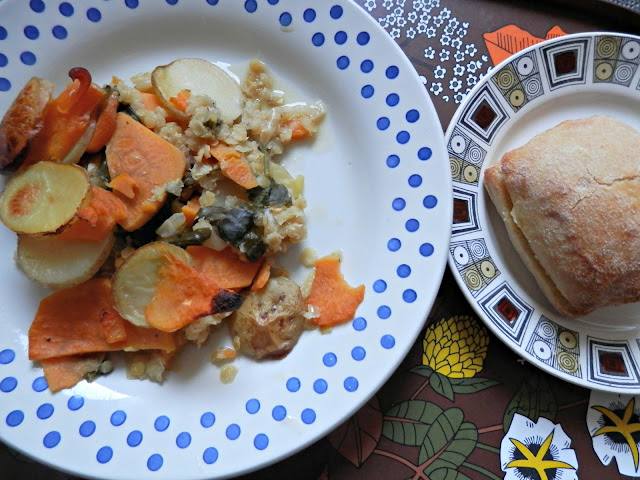 serves 6 (you can make it in a big huge oven dish, or split it into smaller dishes to store or freeze)

How to make your yummy vegan lentil and potato bake

Put the kettle on, or get some water boiling in the steamer pan.

First slice all the root veg into slices about half a centimetre or so thick.  Peel any veg you think needs peeling, but I usually make do with giving everything a good scrub.  Mix up the sliced veg and add it to the steaming baskets, then steam until they're soft.

Put the red lentils in the cereal bowl, and top up with water, just to soak them and help speed up the cooking time.

While the veg is steaming, cut the leeks up into fine slices, then fry in a little oil until they're soft and a bit caramelised.  Add the garlic, sliced or crushed, about 5 minutes before the leeks are finished.

Make up some vegetable stock, I do about 500ml boiling water with 2 veg oxo cubes.

Ok, so that's your prep all done and you're ready to layer up the bake then bake it!

Pop the dish in the oven to bake, about 200 degrees for an hour.  If you use a glass dish you can see all the layers and keep an eye on the lentils to let you know when it's cooked, if they're still orange and hard looking it needs more time!

After an hour you can eat it, or let it cool and fridge or freeze it.  It's waaay better eaten the day after, the flavours get better the longer you leave it.  And it's best served with homemade garlic bread! 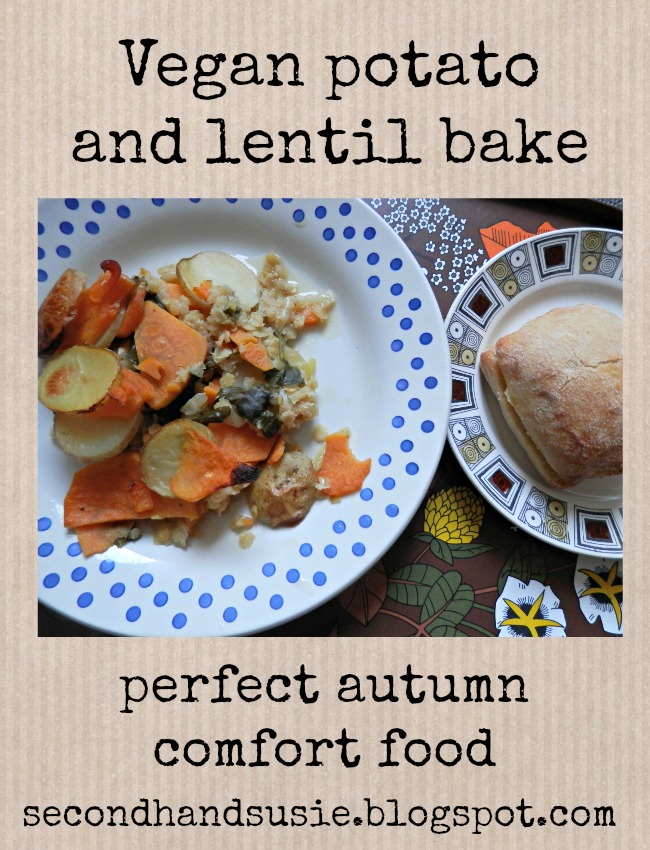 Posted by Susie - secondhandsusie.blogspot.com at 7:30 am 6 comments: