I'm so busy this month in the garden, I have so much I want to get done! 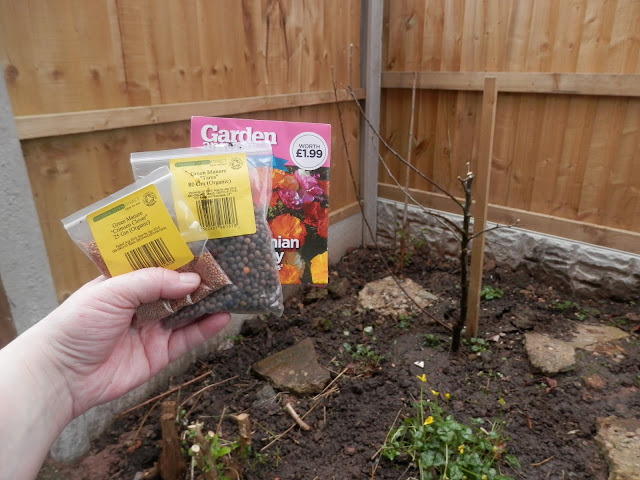 I've been planting seeds all over the place, down the side garden I've planted Californian poppy, crimson clover and vetch seeds around my apple tree.  Clover and vetch are used as green manures, their roots help the soil structure and fix nitrogen, I'm hoping by planting them here I can improve the soil a little, it's really poor in this bed.  I've also planted a little clematis up the fence at the back.

Lots of raspberry suckers have popped up this spring.  I'm really happy about that, because yey, I get free plants and free food!  Nothing else really grows very happily here, apart from weeds and Mediterranean herbs, so if the raspberries want to take over that's fine by me! 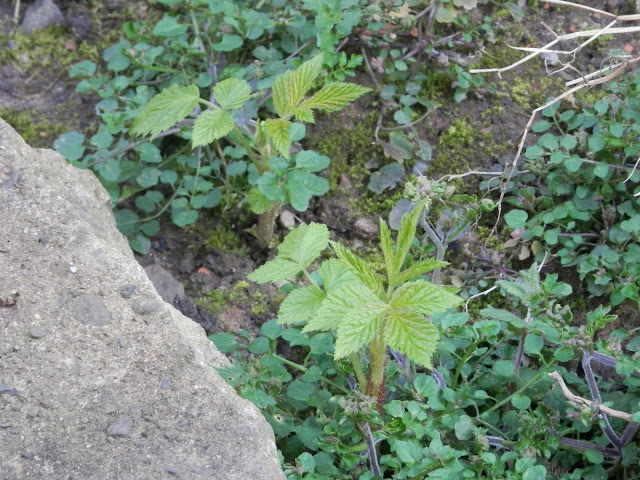 I made a cute little washing up bowl pond this month.  This is recommended by the RSPB as a good way to attract wildlife into your garden.  Mum gave me a bucket o' pond weed and frogspawn from her pond so I'm really hoping I get some frogs! 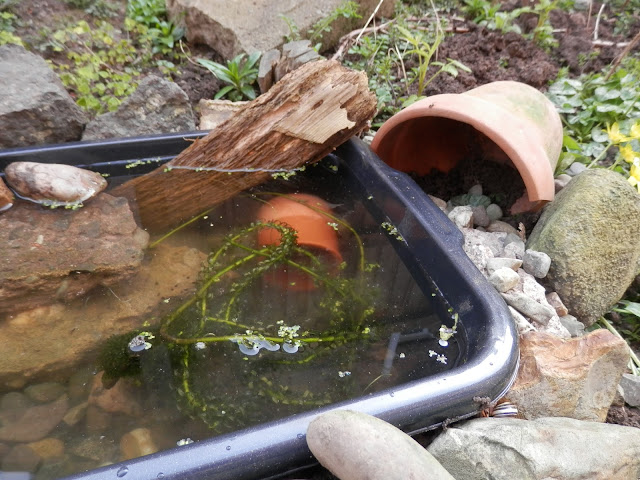 I decided it was high time I cleaned out my greenhouse, it's all shiny now.  And I've planted a LOT of seeds (see here for a list of everything I'm planting).  That packet of mixed perennials cost about 70p on sale last year, I can't wait to see what grows from it! 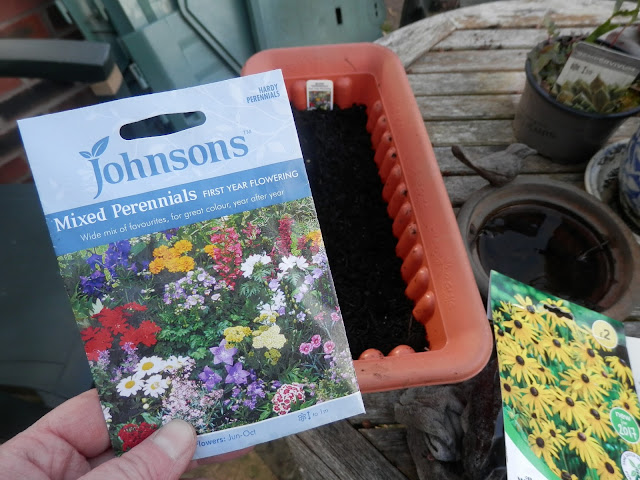 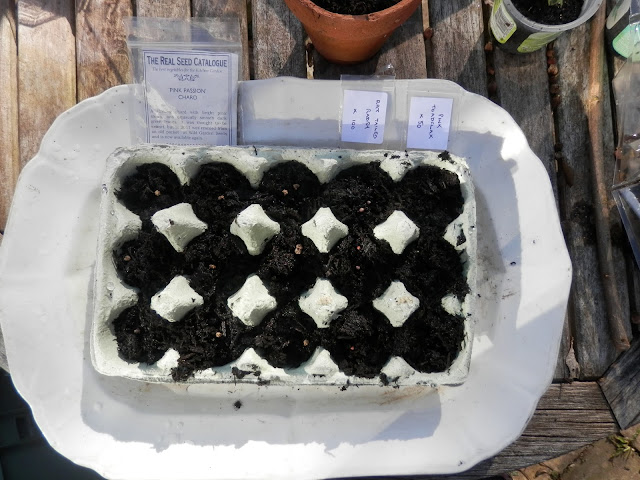 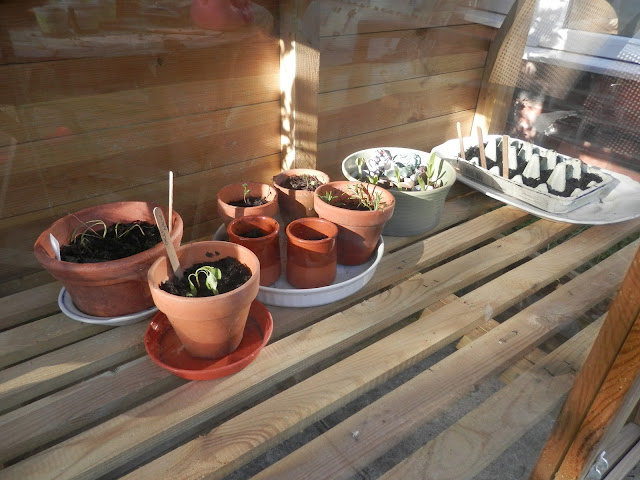 I've been seed starting in cut down loo rolls and egg boxes, and propagating in our conservatory.  I'm starting the seeds in there, then moving them to the greenhouse once they've grown on a bit. 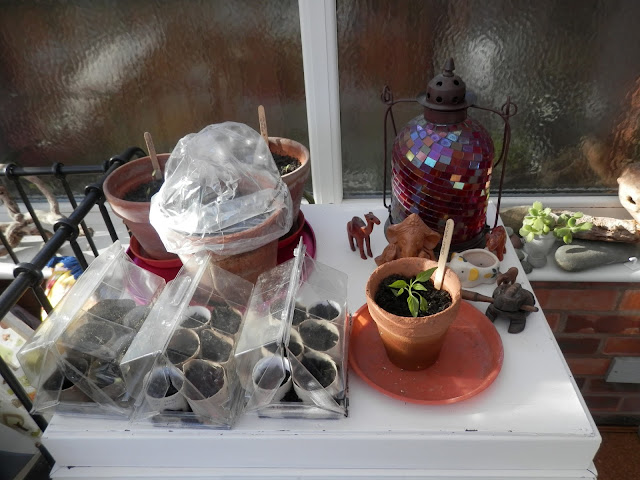 Look at the buds on these blueberries - can't wait!  'Scuse the weeds. 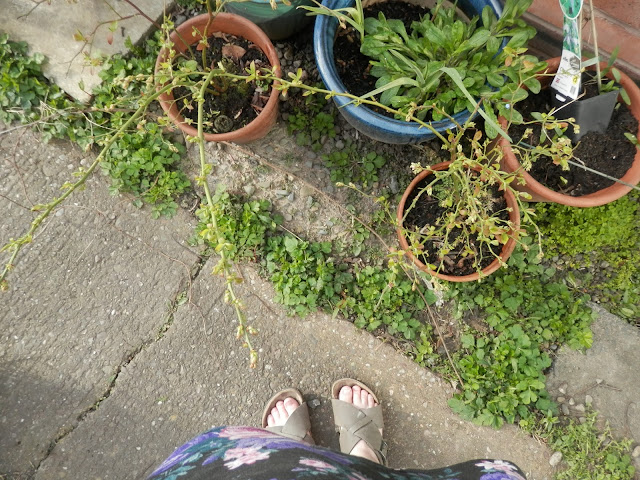 Joe's been working hard on the hedge at the back of the garden.  He's trimmed a lot off the height, the only problem is it's quite thin now and people walking down the alley keep noseying in our garden! 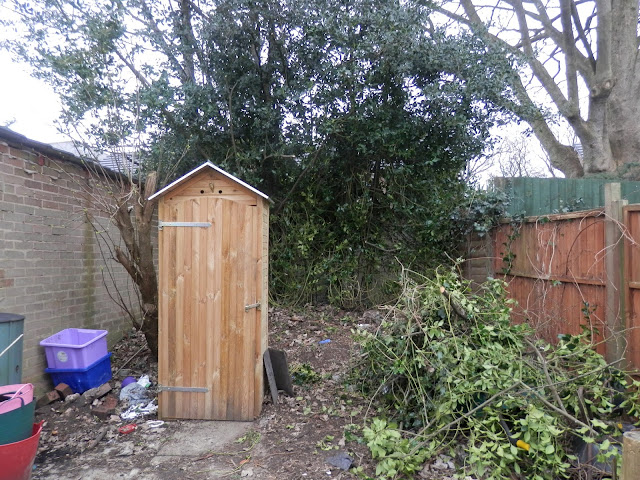 The next job is to dig away some of that bank of soil at the base of the hedge and reclaim the garden!  The soil there comes out several feet and we're going to have to put that soil somewhere, soooo... I bought a couple of raised beds.  They're phase one of our project to get rid of the (horrible, patchy, weedy, bumpy) lawn.  I've only put one together so far, but there's another exactly the same.  We're going to fill them with soil and plant them up, then start mulching and planting over the lawn.  Until it's all gone.  Buh-bye lawn. 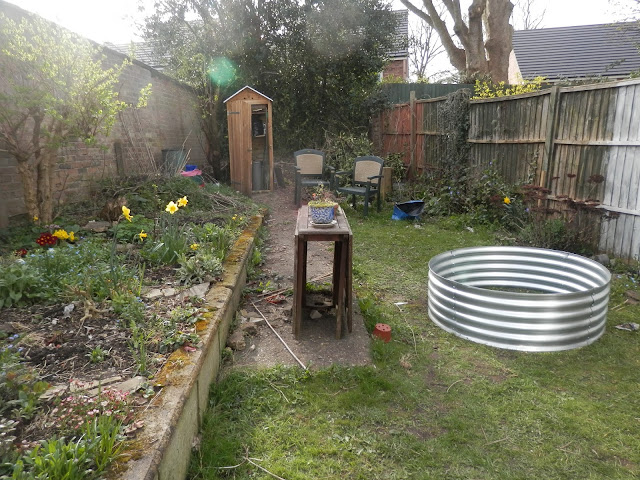 It's looking very 'work in progress' right now.  I must finish painting the fence before summer kicks in and there's too many plants to get through.  I've got to get rid of that table too, it's been in the middle of the garden for ever, can you tell I'm not quite sure what to do with it!

How's your garden this month?

Posted by Susie - secondhandsusie.blogspot.com at 7:30 am 12 comments:

I shouldn't really be buying anything else from the charity shops, but I just had a quick peek in and this happened, 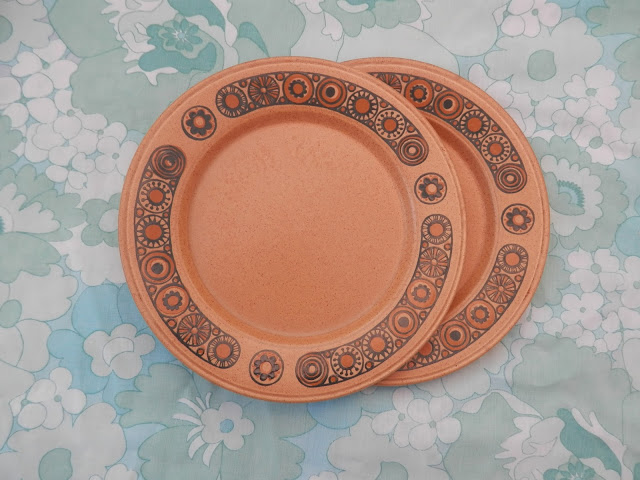 At least there's only 2, right?  I keep seeing this Bacchus design as a full set, with all the plates, cups, bowls, teapot and the whole shebang, which is great, it's my favourite retro plate design, and I would love it, but I have absolutely no room for it.  I'm only allowed to buy orphan retro plates, so I snapped these up, even though they're not in the best condition.
Kiln Craft Bacchus plates, £1 each, local Air Ambulance charity shop. 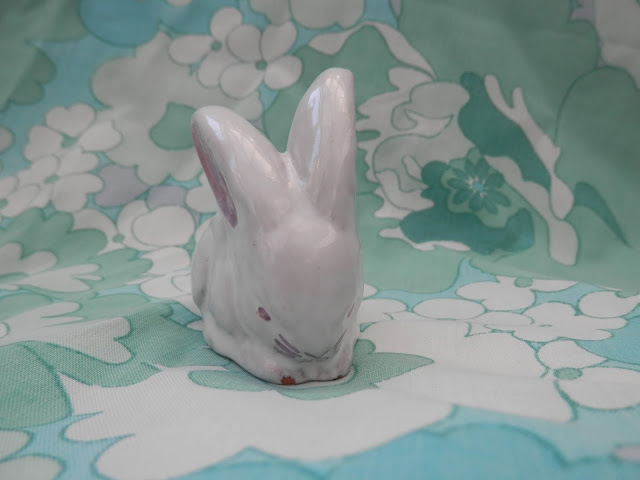 I also bought this little Japanese bunny.  He has a little chip on his toe, but it's not much bother to him in his new life living in the top of a large plant pot containing a rubber plant.
Japanese bunny, £1, Sue Ryder charity shop. 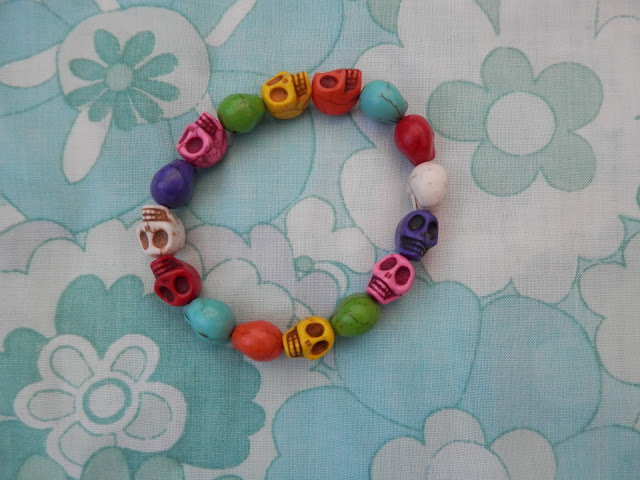 Aaand this skully bracelet.  Beacuase it's so rainbowy.  But also quite heavy which may be why it made it's way to the charity shop in the first place.
Skull bracelet, 49p, Oxfam charity shop.

Have you had any luck in the charity shops lately?

P.S. Check out my other charity shop posts for more!

Posted by Susie - secondhandsusie.blogspot.com at 7:30 am 10 comments:

Making one small change at a time can make becoming eco friendly loads easier.  Lots of small changes add up to a big difference. 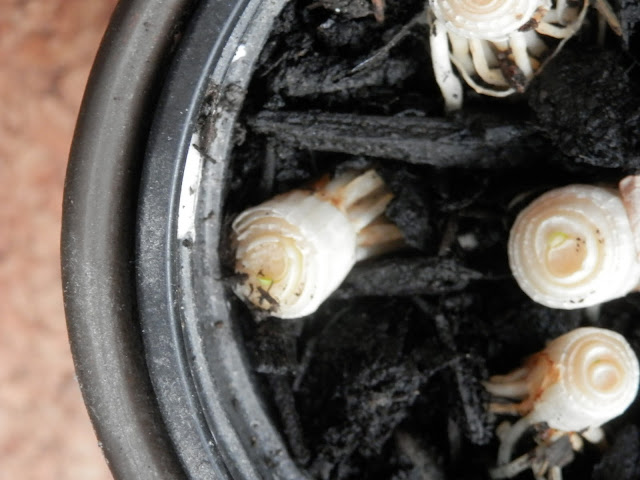 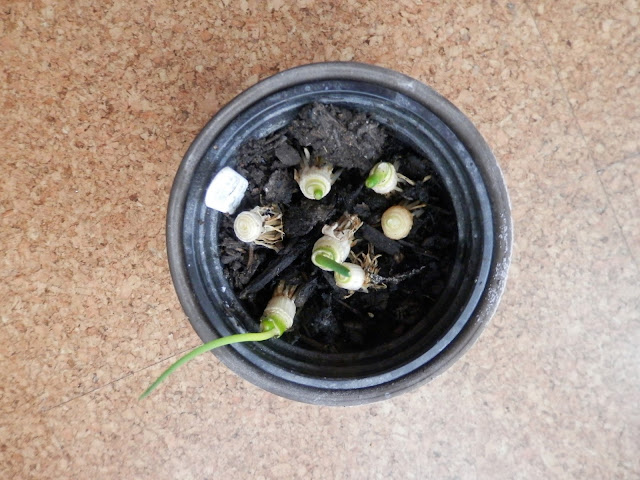 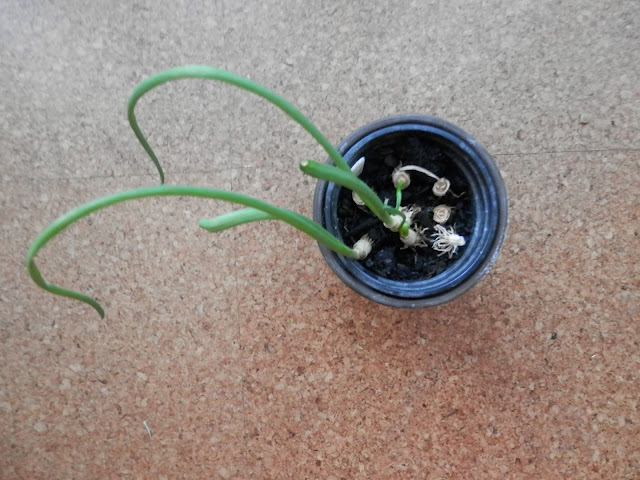 The spring onions I buy from the supermarket were grown in Egypt.  I'm not sure where the ones I buy from the market are from, not England though because all the English produce is labelled.  There are some serious food miles attached to my little green onions, so I want to get the most out of them.

It's the easiest thing in the world to replant spring onion scraps. I store my spring onions in a mug of water in the fridge door, which keeps the roots nice and juicy - if you don't do this then you might need to add a step, and stand the cut off bits in a little water for a couple of days to get the roots rehydrated.  Cut off about a centimetre of the white from the base of the spring onion, make a little hole in a pot of compost, poke the spring onion scrap in, cover the roots as best you can.  Keep the pot watered and pop it somewhere nice and sunny, like a windowsill.  You can keep adding rooty scraps to your pot as you go, until it's full.  Take out any that haven't worked (it can happen to anyone!) and use that space to regrow new onion scraps.

You can cut off your regrown spring onion greens and add them to all your yummy salads and meals!

Don't forget to check out my other small changes to help you live a greener life!

Posted by Susie - secondhandsusie.blogspot.com at 7:30 am 10 comments: 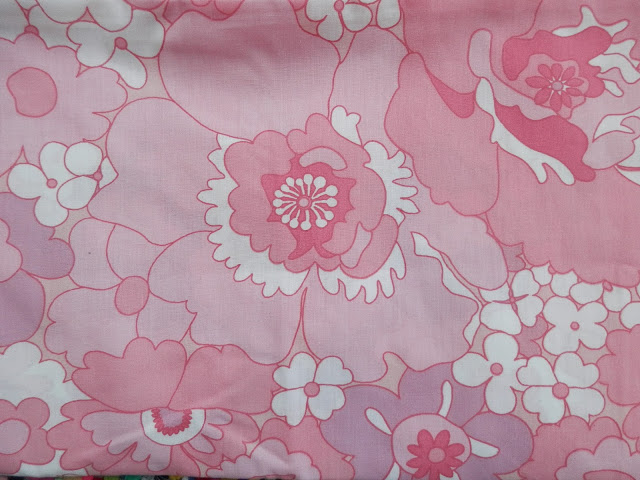 Healing - so, I'll start with this, as I started with it last time, and I think it's important that we talk about miscarriage, so many people go through it.  I'm feeling a little better after my miscarriage last year, it's funny (aka horrible) living with something you'll never really get over or feel better about, but I feel happy sometimes and that can only be a good thing.  I had a real run of feeling poorly and sorry for myself last year (was 2016 good for anyone?!) nauseous pregnancy, miscarriage, then I fell over and twisted pretty much everything, then had norovirus and then a cold, but I've been ok the last few weeks and I'm trying to look after myself now, eating lots of greens and going swimming.

Swimming - I'm back to my swimming, it feels really good!  I'm really slow again though, so lots more practice needed.

Auntie-ing - My day off work is the day mum looks after the niblings, so I go to play most weeks which is lovely.  Big niece asked me to walk her into nursery school last week and I felt all warm and fuzzy.  We do lots of drawing and playing dollies and reading books and watching either the Gruffalo, We're going on a Bear Hunt or Peppa Pig. 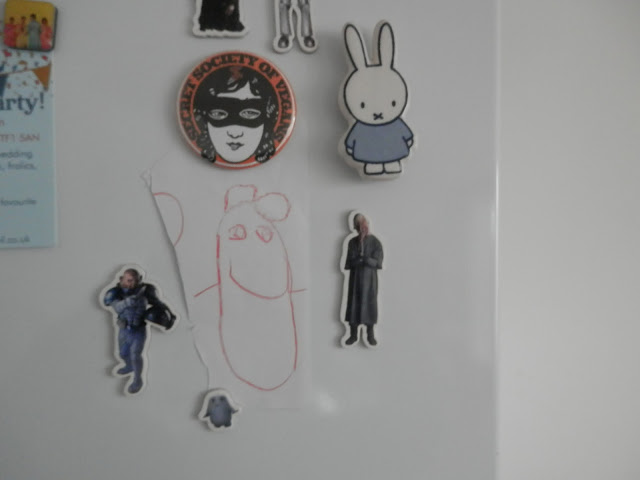 Reading - I've been loving anything by Holly Bourne and lots of gardening books.

Watching - at the cinema we've seen La La Land and Fantastic Beasts and Where to Find them, and the new Star Wars and that's about it, winter is the season of hibernation after all, not gallivanting to the pictures.  And hibernating in front of the TV is pretty much all I've felt up to this winter, I loved the new Gilmore Girls, and loads of other stuff on Netflix - iZombie, Crazy Ex Girlfriend, Santa Clarita Diet, Riverdale.  I've rewatched my Ugly Betty DVDs too and I loved that.

Listening to - I saw a band called The Small Glories and I've been listening to them loads ever since, and the La La Land soundtrack.  On repeat.  I'm really sad that my Taylor Swift CD is lost somewhere in the house and has been for months - come back to me Taylor I need to shake it off!

House renovationing -  Mum paid for us to have a beautiful new front door, Joe painted it pale blue and tis lovely and warm.  Joe's mate is a blacksmith so we've commissioned him to make us door numbers and a DOOR KNOCKER IN THE SHAPE OF A SNAIL - oh yeah!  We bought a fireplace too, and lots of picture frames so we can get some art on the walls.  Joe demolished the old shed too and I'm having a worrying urge to dig up the lawn and turn it into a flower bed! 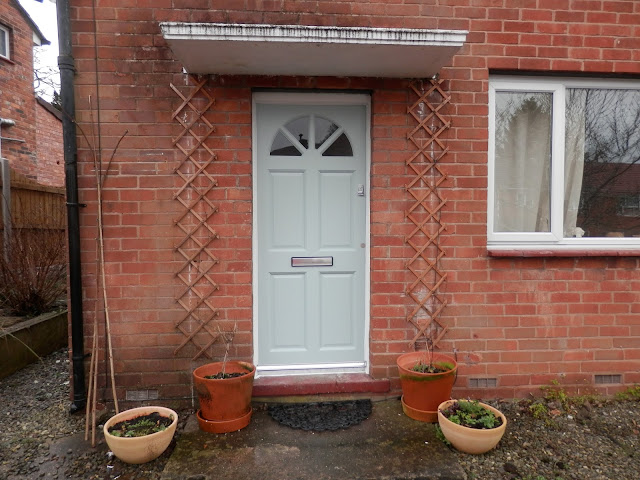 Guiding - I've started helping at a new unit, I only go once a fortnight because of work, but I stay for Rainbows and then Brownies straight after.  They're lovely.  Some of the Brownies used to be my Rainbows, so it's nice to see them again.  We did a happy smile challenge badge too.

Eating - it's a hard job but husband and I have decided to try every curry place within delivering distance to find the best.  Our usual has been replaced (they started putting egg in the bhajis!!!!), my current favourite is called the Blue Elephant (though I like Bangla Pride too), but there's still more to try.

Looking forward to - we've booked our holiday in May to Aberdovey and I'm sooo excited to spend some time by the beach!  The touring production of Wicked is coming to Birmingham so I'm going to try to get tickets to see that too. 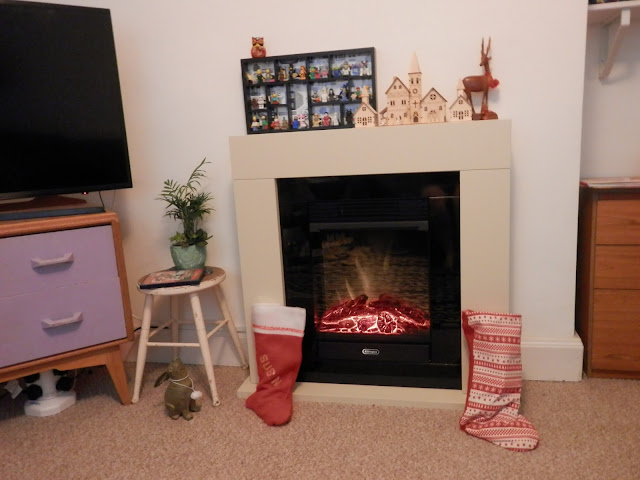 Working - the whole of 2016 was spent wondering if I'd have a job, we were told in January 2016 the library service was being severely cut, and basically prepare for the worst.  The date we could reapply for our jobs kept being pushed back, until the week before Christmas we were told we would be 'slotted in' (those who were left put into  jobs as close to their original hours as possible, as well as losing some staff to voluntary redundancy) so at least there was no need for interviews.  After something like 350 days of waiting to hear if I had a job I've ended up with in the same post with the same number of hours.  It's a relief, but it was an irritating and stressful process and we've lost a lot of good library people along the way.

Gardening - so much to do, I wish for nice dry weather so I can get out there more I want to the garden to be beautiful this year.

Blogging - I wrote a little thing for Cut out and Keep's blog and one of my real life friends started her own blog so you should go and check it out, it's called Book Forager.

The most popular posts here have been,

How to make a no 'poo salt and lemon hair scrub,

My suburban, edible garden this January,

All the vegan cheese crisps reviewed,

Things I've learned from 10 years of being a vegan.

Hope you've had a good winter and you've kept all lovely and cosy and warm!

Posted by Susie - secondhandsusie.blogspot.com at 7:30 am 13 comments: