How to Make Onion Bhajis...

After several more trips to the market to buy enormous onions I've perfected my onion bhaji method.  Most bhaji recipes say to use gram flour, which is made from chickpeas, it probably works better, but I have yet to find gram flour in the shops of Shropshire, so I just use plain white flour for now and they taste fine to me. 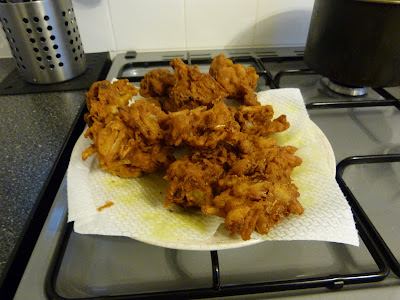 1. chop up the onion, I try to do it as finely as possible but this is down to personal taste...I try to chop it as quickly as I can 'cos it always makes me cry!  Crush the garlic cloves in a garlic press.

2. Put all the spices in a pestle and mortar and mix them together, grind the coriander and cumin seeds up a bit (It took me ages to get the amount of spice right in these, I find you have to add a lot to get some flavour into them, I think it's something you just have to experiment with you get right for you, so put in spices to your own taste)

3.  Put the four, oil and enough water to make a medium thick batter into a large mixing bowl, add the onion and spice and mix.

4.  Heat a 2 or 3 inches of oil in a heavy based pan, drop a little drop of mixture into the oil, if it fizzes up to the top and bubbles the oil is hot enough, so plop 4 or 5 level tablespoons of mixture into the oil, leave for 3 or so minutes to form a hard crust then use tongs to turn them over, keep turning until they're dark golden brown - usually takes mine about 6 or 7 minutes per batch, repeat until all the mixture is used up, this recipe makes around 15-20.  Once you've fished them out of the oil put them to drain on a piece of kitchen paper.  It's a good idea to make a small test bhaji first...to check seasoning, batter consistency (if there are lots of bare patches on your bhajis you need to add more flour) and cooking time (and so you get to eat the mini bhaji! Om nom nom!)

5.  These freeze well, I put them in a bag in the freezer and re-heat them in the oven when I want them!

I've been trying to cut back on buying and eating pre-made/packaged foods...because I'm vegan and can't have soya there's not much in the way of prepackaged stuff I can eat anyway, I usually have onion bhajis, battered onion rings, Linda McCartney sausage and falafel in the freezer, but now I can cross bhajis off my shopping list, I much prefer the ones' I make, I reckon 30 bhajis cost me about £1.50 in ingredients to make and a little for gas on the cooker, which is much cheaper than in the shops, I know exactly what's gone in them and there's no plastic packaging to get rid of!  Hurrah!

I bet some of you make bhajis too...any tips?
Posted by Susie - secondhandsusie.blogspot.com at 11:52 pm