How to Make Plum Vodka, Plum Rum (and probably any other plum based alcoholic beverage too!)

﻿Last year we sampled some of my friend's damson vodka, which is totally delicious, and as we have an over abundance of plums this year, me and mum decided to make plum vodka.  We also found some Bacardi in the cupboard that someone gave us, so we made plum rum too!  There are lots of directions on the interweb that require heating the vodka and dissolving the sugar into it, we decided that was a bit of a faff and basically bunged sugar, booze and plums into a kilner jar...here's how...

1.  Clean the plums, cut off any manky bits and cut them into halves, weigh them, then measure about half their weight in sugar (so if you had 500g of plums you need 250g of sugar).  Put them in a big kilner jar.

2.  Add the vodka/rum/any-other-alcohol-you-suspect-would-be-improved-by-adding-sugar-and-plums to the kilner jar, this is where we weren't very scientific and just added the whole bottle rather than measuring anything out.

3. Shake the kilner jar until the sugar has dissolved (takes a long time, good exercise though!) 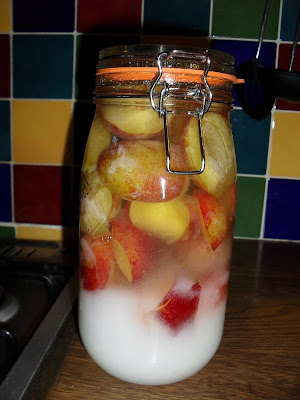 ﻿This is the plum vodka just after we made it, before vigorous shaking commenced.  Below is the vodka (small jar - 1.5 litres) and bacardi (big jar - 2 litres!) about 3 weeks after we started it...mmmm.... 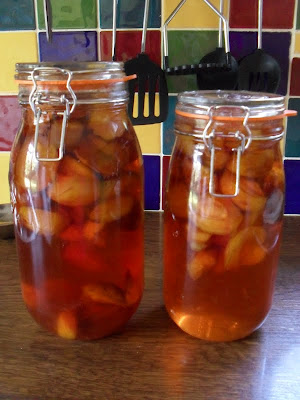 We're going to decant it into small dainty bottles to give as Christmas presents this year!
Posted by Susie - secondhandsusie.blogspot.com at 9:29 am